The Basics of AMR Robots 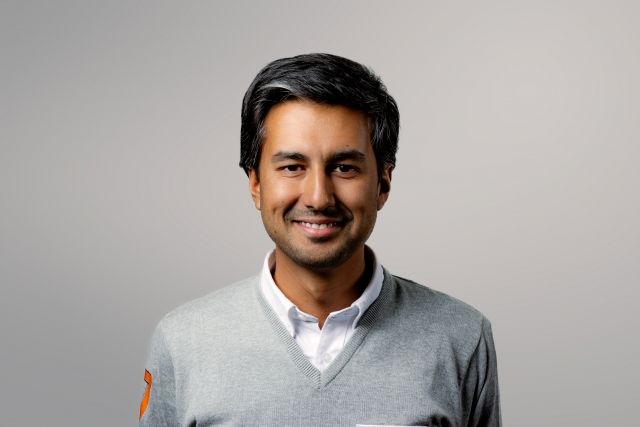 AMR robots have been one of the most discussed forms of automation technology in manufacturing and distribution centers. The potential to have automated transportation is a huge benefit to save on costs but also to fight off labor shortages. In this post, we will go through the very basics of this type of technology and help you understand what makes an AMR robot such a polarising piece of technology. But firstly, do you really need an AMR robot?

Firstly, Do you really need an AMR Robot?

When it comes down to deciding on how to implement automation in your facility, you need to understand what you are trying to accomplish. There are a few unintended drawbacks when it comes to implementing an autonomous mobile robot in your facility. One of these is the assumption of obstacle avoidance (which we will cover later in the post). This idea of obstacle avoidance can lead to errors in your operation that are not intended—one of this being efficiency.

When it comes to running an efficient facility, ensuring your material transports are reliable is critical to the facility’s overall function. If you have a transportation method that then chooses its path each time it finds an obstacle, it causes a change in the plan. Whereas with other automation solutions such as the eQart you set the route, and you know that every time it will not stray from that route. An A to B route should only be an A to B route, every single time.

Another consideration if you need an AMR robot or not is that of the types of materials you are transporting. If you need it to carry very heavy components, it can be a little nerve-racking for your operators and employees to know that an AMR can go off course without any decision from a human element. Just this knowledge that it can go off the path at any time can cause some tension on the facility floor. Using a dedicated solution would not have this added element of anxiety, because it is 100% certain it will not choose its path.

When beginning your automation journey, ensure you are not following the same path of the market and demanding a “smart robot” but finding the best solution for your unique user case.

To help understand further what the possibilities are, we will begin by establishing what an AMR is. 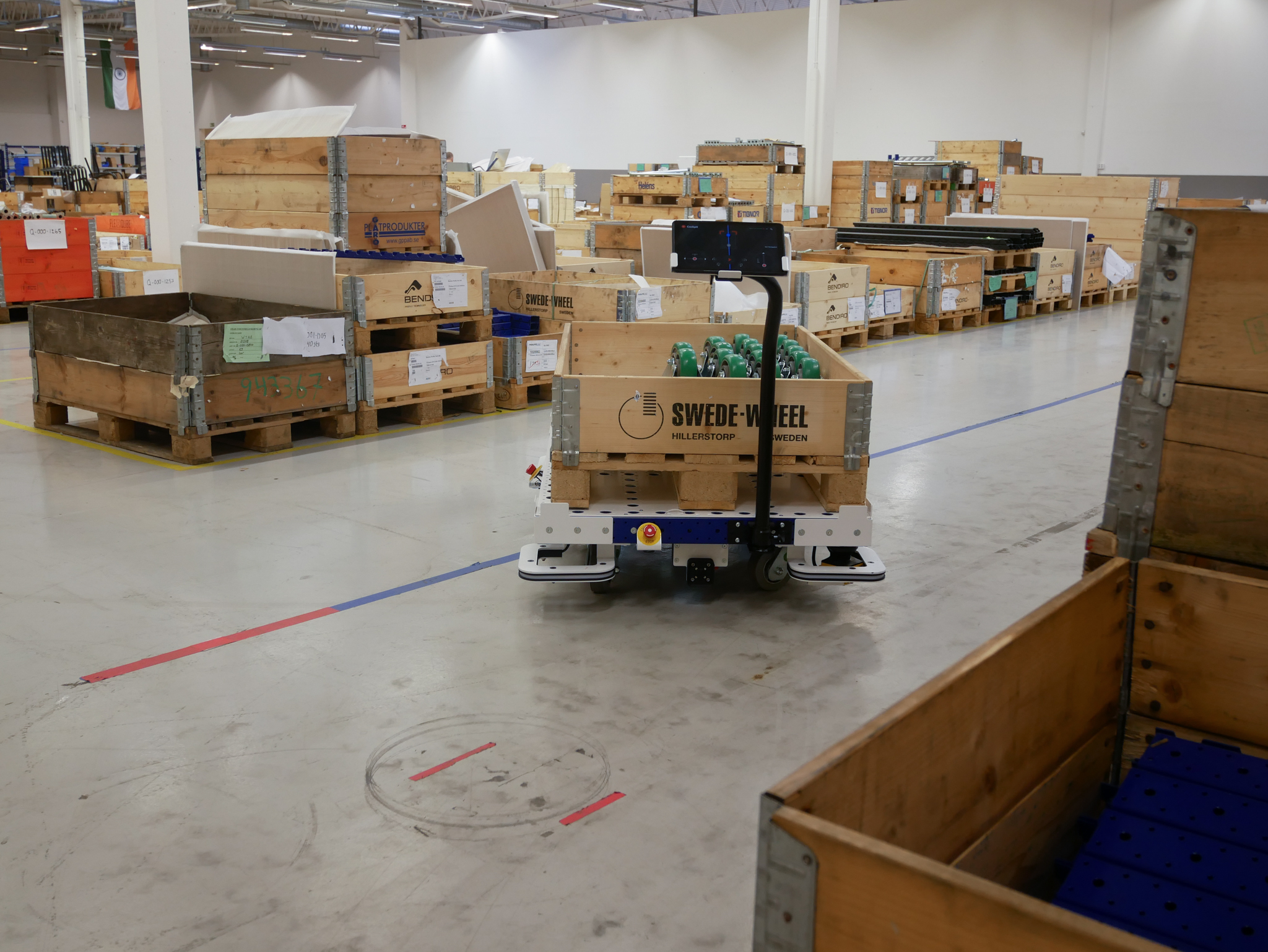 What is an AMR Robot?

AMR stands for an autonomous mobile robot, and it has been commonly shortened to AMR or AMR Robot. The piece of technology that allows the AMR to stand out is its navigation technology. AMR’s are equipped with advanced navigation technology enabling them to create a map out the entire facility and determine their routes as they move. Navigation can offers advantages to AMR over other forms of technology, but it comes with a steep price. Using such advanced technology may not always be recommended for every type of material and goods transportation within your facility; it all comes down to each case.

For the AMRs to navigate so well, they need to have highly advanced sensors installed into their unit. Different environmental sensors can be used, but most commonly, laser scanners are used or LiDAR sensors. LiDAR scanners work by emitting pulses of light that reach different surfaces, and they bounce the light back to the sensor where it is received again. The processing system onboard the AMR will then determine how long it took for the light to be transmitted back to the sensor. This allows the LiDAR sensors to map the distance between individual objects and provides feedback to the AMR robot about where it can and cannot drive.

Another method to navigate is the updated technology of 3D cameras. 3D cameras work in a similar fashion to the stereo cameras, by measuring the pixel distance of two images of the same scene. However, a 3D camera adds an extra measure of precaution on their by emitting an infrared light pattern. This helps the camera determine items such as a painted white wall because an image with not much to contrast makes it difficult for a stereo camera to locate its distance.

How does an AMR robot know how far it has traveled?

After the sensors have been covered and we know the AMR robot shouldn’t run into anything and can navigate its way. The robot also needs to know how far it has traveled within the facility so it can get accurate information on its routes. This can be done in a few different ways, such as measuring the amount of time the motor has been in motion for, and this can give you an essential estimation of how far the robot has traveled. Another method to do this is to use motion sensors to estimate the robot’s position over time. This method can be quite sensitive to errors, and a rapid collection of data, constant calibration of instruments and processing are needed for this to be as accurate as possible.

How does the robot know where it is – localization?

The next step is to ensure that the AMR understands where it is within your facility. Because if it cannot localize itself, it will be difficult for it to determine where it should navigate to or the distance it has traveled. The AMR robots can never know 100% where they are, but instead, they are data-driven estimates of where it could be. As the AMR drives around the facility, it is continually trying to determine whether the laser scans match the map; this is commonly referred to as scan matching. There can be a few different ways to perform scan matching such as:

After the process of scan matching, the robot generally knows it is only an estimate of where it could be located, so then it creates copies of itself to see if the scans match the map. Then the AMR begins to eliminate the guesses which do not match up with the plan. Each of these estimates is then averaged, and this average is what the AMR uses as its location. In general, AMR robots do this estimation 15 times per second. If an AMR is unable to localize itself and the scans do match, it goes into a mode called mislocalized. 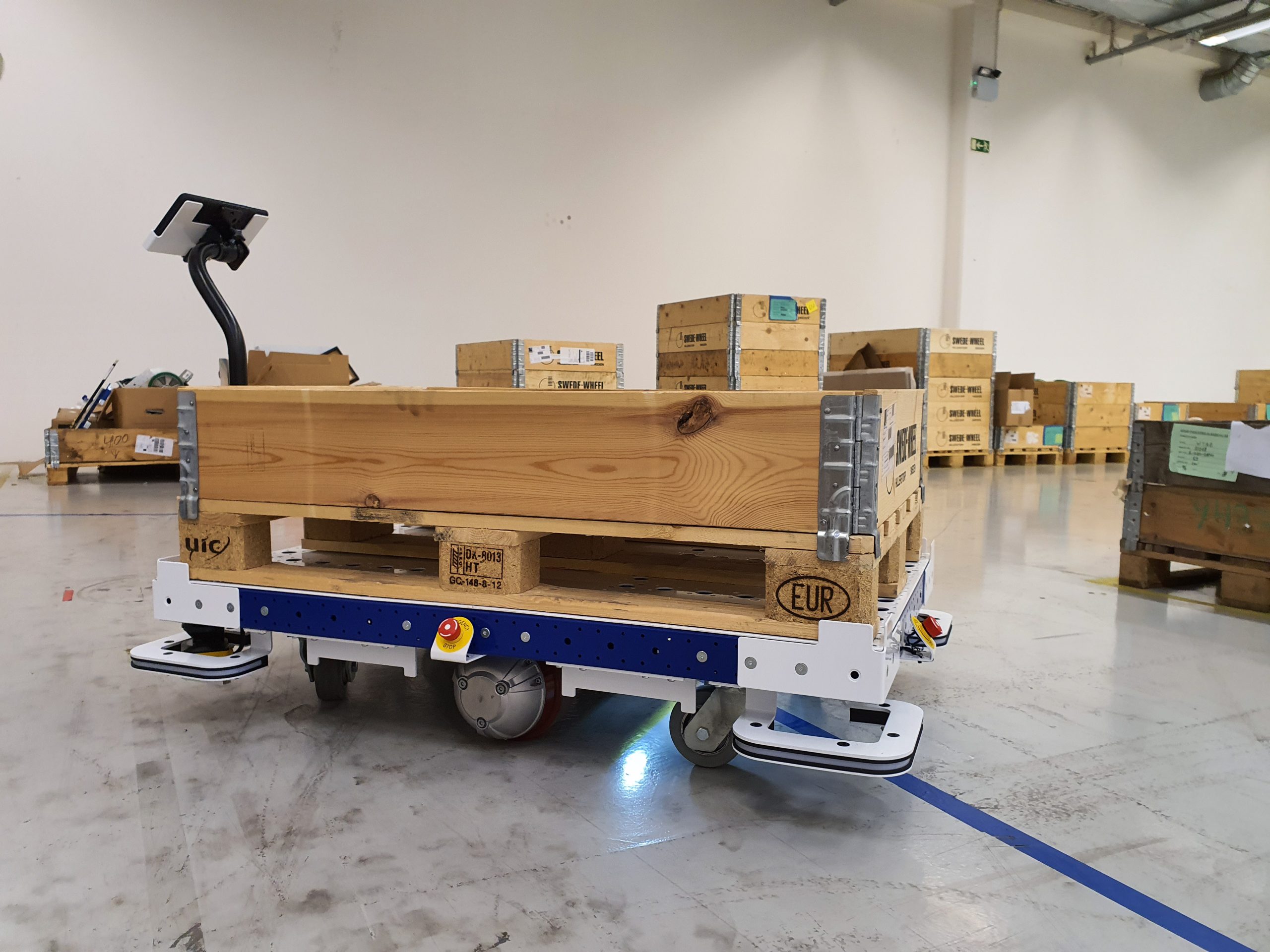 How does an AMR Robot set up a Map?

If you think about yourself going out onto a street and trying to draw a map of your surroundings, it would most likely be quite tricky. You would need many drafts and most likely need to change the whole map once you had circled back through all of your surroundings. The way that an AMR can map its surroundings is by a method called simultaneous localization and mapping or commonly referred to as SLAM. There isn’t one perfect way to do this, and many AMRs do this based on the algorithms that they have within their software. Some methods of doing this are:

How do the AMRs know there is an object – Object Detection

When it comes to finding objects and object detection, AMR robots use many of the above tools to find these objects. Generally, the robot will move to the location on the map where the object is located. This is done in combination with the mapping and navigation techniques above. Once it localizes itself within the area of the object, the AMR needs to then locate the object. To find the object, most AMRs will then use laser scanners to detect a significant shape that it is programmed to detect.

These are some of the basics to outline how an AMR robot works. While this advanced technology seems like the cutting edge of material transportation, many of these features may not be needed. With these features comes an extra cost in the initial purchase; many AMR robots are quite expensive and only allow facilities to purchase a small number of them, if any at all. This also doesn’t include the implementation costs as well as the time cost to each of these robots.

There is no denying that an AMR robot can bring many benefits when it is implemented for the right uses and the right applications. Once again, it all comes down to the use case and how the technology should be used. At FlexQube, we have implemented our own automation solution, the eQart. The eQart is able to solve many of the transport cases of an AMR robot without the price. The eQart goes without some of the navigation technology features. However, if you have a determined route for material transportation, then the eQart may be a better option over an AMR robot. Having an automation solution that can solve a particular issue or follow a standard loop route or an A to B route would not need to have all of the advanced technology that comes with an AMR Robot. 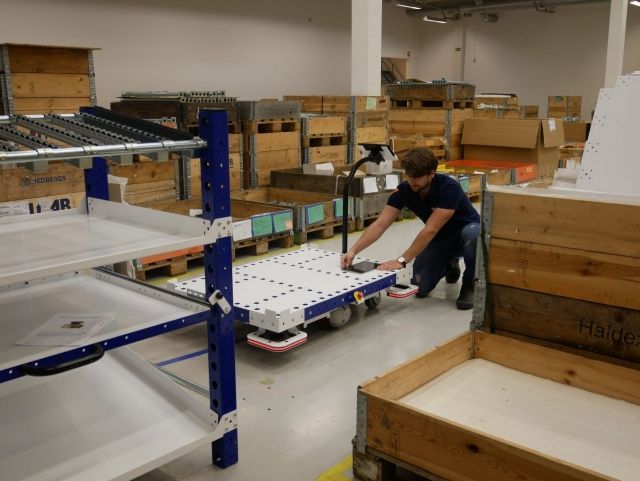 What are the differences between the eQart and an AGV? 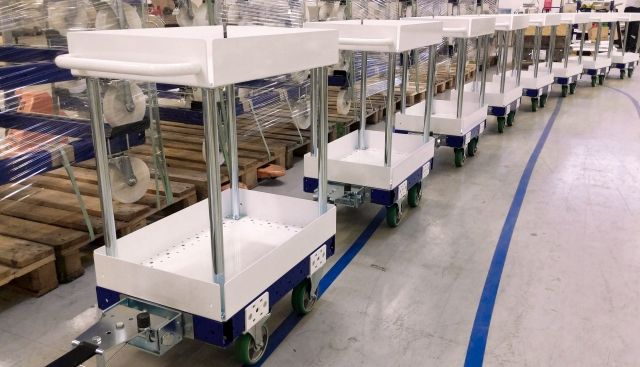 FlexQube received an order from Burckhardt in Switzerland in April of 2020 to deliver over 100 smaller material handling carts.